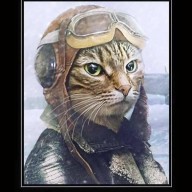 I've been seeing a lot of discussion about removing the track bars from a YJ and am curious about it. My 94 rides really, really rough. I didn't expect it to ride like my Grand Cherokee Limited, but it's almost bone jarring on the roads around here. I've seen some people suggest removing the track and sway bars to soften the ride and I've also seen some people who leave them in for stability. There aren't any real trails in this area, my jeep will probably only see paved roads and maybe one or two dirt roads, but no real rough terrain. I'm wondering if I should remove them? While the current ride isn't very comfortable (I've even had the tail gate pop open after hitting some particularly rough patches of road, but that's another issue all together), I don't want it to get squirrely on me either, especially with winter almost upon us.

What are your suggestions? To remove or not to remove, that is the question. 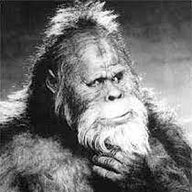 When I put new suspension on my 94, I took them off, since the leaf springs act as a track bar on all leaf sprung vehicles. It definitely softened up the ride. I too don't have many "legal" trails to ride in my neck of the woods, so it's mostly gravel roads and a few service roads that I ride on. If you do a lot of highway driving, it might be best to leave them on for stability reasons, but with them off the ride is "cushier" and the suspension travels quite a bit better.

They don't really help with stability, they really only help with steering feel. The rear can be thrown away without thought. I'd yank the rear off a 1,000 mile $50k showroom quality YJ. I would leave the front on unless lift was added, then I would either ditch it or retain it with a bracket that makes it work with the added lift.

Keep in mind, ditching the bars will not transform your YJ into some magical cloud riding experience. Most of the poor ride comes from the suspension components themselves. I don't know what suspension you have but a lot of the options on the market ride pretty terribly. If you are still stock that's different, but seems like most YJs aren't stock anymore and so far 2 out of the 3 aftermarkets rode less than stellar and one was awful.

I would recommend keeping the sway bar for stability.
G

What Squatch said is about the size of things. I removed all 3 off the couple YJ's Ive had and was happy with no handling complaints. There not caddy's though, and If the springs and shocks are done you might consider replacing them eventually for a better ride.
OP

Thanks everyone. Good food for thought. I may remove the rear eventually to see how much of a difference it makes. Then if that doesn't mess with my handling too much, maybe the front as well. That will come when I find a little spare time. There's not much of that around lately though. It doesn't have a lift and I'm pretty sure the springs and shocks are stock, but I have no history on this jeep. The dealershihp that had it didn't know anything about it, at least nothing they would tell me. Thanks again everyone, for the speedy and concise answers to my questions.

Can't say if removing them helps the ride, but mine are gone too., they just didn't fit after the lift.
Stock rides like crap, though @machoheadgames is a big fan of Old Man Emu stuff.
I think the track bars probably have more to do with side impact rollover protection than anything else.
That and AMC trying to turn Jeeps into cars to make them more appealing to the soccer mom, minivan crowd.
Not that there's anything wrong with minivans, the few I've rented absolutely rocked!
G

"Not that there's anything wrong with minivans, the few I've rented absolutely rocked!"
Ok..I'll confess. I almost bought one years ago. back then I did a boat load of 2-3 day camping/fishing runs that were around 5 hours each way. The truck and camper were killing me in fuel and figured I could nap in the back of the van with the dig. Never did buy one after I envisioned me in double knit slacks,bald(er) and well just over the line of some phase of life LOL..
Y

Buy a minivan, check your testiculs at the door. Kind of like buying a Jeep Liberty.
Reactions: jeepjoe43
G

ytradio said:
Buy a minivan, check your testiculs at the door. Kind of like buying a Jeep Liberty.
Click to expand...

He,he,he,he...same engine and stuff. Boy, one way to piss off a new jeep owner is to tell em they are driving a overpriced mini van.
Reactions: jeepjoe43 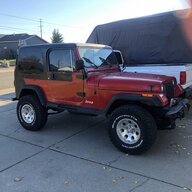 I have heard its best to leave the front one on get rid of the rear one. I am adding a JKS 9800 adjustable to the front of mine and tossing my rear. Will let you know how that turns out. 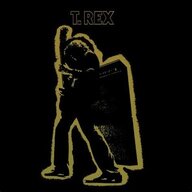 I look at it this way.....When they built our YJ's, They were built to DOT safety regs for highway travel. When AMC designed the YJ,
They DID NOT build them to off road in the extremes that came around later and have the traction bars installed for highway
travel and grocery getting. I don't off road mine other than pastures and the occasion dirt road. But the Cat's that get into extreme
Jeep sporting, Mud boggin' Rock crawlin' Hey Ya'll watch this, Need the bars gone to achieve the articulation needed.
So pretty much know what you need and in the words of a Great Man, Improvise, Adapt, Overcome....