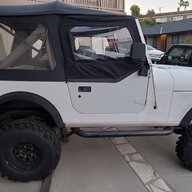 All you need is for the fuel shutoff solenoid and that can be the old ignition wire to the spark coil from your old gasser.

As far as the sensors, there really aren't any. The sensors can be adapted with fittings to run stock Jeep sensors on the diesel motor except of course a boost/manifold pressure gauge which the gasser wouldn't have had.

The starter solenoid and starter get wired up just like any other starter, basically the same but the solenoid is sometimes on the starter instead of on a fender like the Ford style movable shoe starters used in a lot of 70's, 80's and some 90's Jeeps.

I stripped all the wiring out of my CJ and got rid of everything that wasn't needed. Kept the sensor wiring for oil pressure and used the positive wire that used to go to the coil on the fuel solenoid.

The alternator is a GM style and uses a 12SI or some such. It wired up the same as the old 10SI that was in the CJ originally so no changes there. The RPM tach can be connected a couple different ways. On my Jeep the tach could run off a wire on the alternator or for more accuracy I could get a crank sensor kit and run it off that. It is running off the alternator for now which gives close enough general RPM indication to give a ballpark RPM. I know it may be a couple hundred R's off but it has a governor spring that won't allow the engine to over-rev and therefore protects it from exceeding around 3,750 RPM or there abouts.

Originally the governor spring was set for 2,750 so I changed it to 3,200, then again to 3,750 but I never get even close to that RPM cause it sounds way too high just by the noise it makes.

Not sure what exact year you have but for emissions legality in the 50 states, the engine should be the same year as your Jeep or newer to comply. Not saying whoever swapped it complied but if the states testing gets involved or an inspector has to sign off, you'd better tell them it is the same year or newer for legal reasons.

Started working on the front Dana 44 axle assembly this past couple of weeks. Pictures to follow when I get the chance.

Originally back in around 2007 or 2008 when I first built the Dana 44 axle for my CJ I re-used the 5-bolt hubs, rotors, calipers, stub shafts, inner and outer knuckles off the D30 CJ wide-track axle. This was convenient to re-use the heavy duty 5/8" thick wall Chromolly steering linkage I built a year before for off-road application and the crossover high steering kit that was an expensive weld-on kit. I didn't like the idea of wasting money I already spent on things so reuse was logical.

Fast forward to 2016 when I picked up a set of heavy duty custom axles for my 1999 XJ Cherokee Classic I had at the time. The front axle was a Jeep SJ narrow-track axle modified for the XJ. It had long arm brackets welded and was normal 1/2 or 3/4 ton inners, outers, rotors and stub shafts with the internally splined lockout hubs. When I built and sold the XJ, I had put D60's and had this SJ 1/2 ton left over. I decided to upgrade the CJ to the SJ outers with 30 spline internal type hubs, larger full size brakes and the heavier full size truck rod ends.

So the job of swapping the outer knuckles outward and all related parts along with even heavier duty steering components has begun. The rotors on the SJ axle were swapped years ago for F-150 5x5.5 lug pattern so they will match the re-drilled Sterlin 8.8 rear axle and remain CJ style 5x5.5 pattern.

More to follow and the pictures when I get the chance.

There is a hole and some foam has deteriorated on the drivers bolster. The frame is also cracked so the back rest bends and flops around. I am going to have to carefully strip back everything and re-weld the frame. Maybe it will need some reinforcement added to where they seem to fracture. This will not be the first repair as it seems clutch action causes the seatback failure mode. Will see if I get them.
RR
OP

Haven't posted in a while but I have begun moving forward again on this project.

Getting ready to order the full hydraulic clutch kit with pre-bled master and slave. Going to possibly get kevlar friction disc for better wear and grip.

Also replacing all the bellhousing bolts with new grade 8.

Freshened up the transmission and will be doing some transfer case work that I will document in the build.

Working on cleaning out the garage to get the Jeep back inside also searching for the hardware that was removed from it when the fenders and front grill were removed. Also looking for the belly pan skid bolts etc. It's hard when you've moved and everything is all disorganized.

I am getting the old engine crane painted and resealed up. I've had it for 32 or more years and it's been good to me over many engine swaps and hot rod builds in my youth. It's almost as old as the Jeep itself.

In less than a year and a half my Jeep will officially be 40 years old........ Where has the time gone? I can remember wheeling back in the day when the CB was your social media platform and there were a LOT more miles of off-road trails that were open to the public than today around here.

It hasn't been registered or on the road for more than a couple days in the last 22.5 years.

Welp, back to work in the garage I go...

The Farmstrong CJ-7/8 motor mounts came in a week ago. They were back ordered for a few weeks but no big deal, I wasn't ready for them anyhow.

The AA transfer case adapter is being installed in the transfer case to mount the D300 to the ZF s5-42. It is 9925 I believe in the AA catalog and the same as used with the C6 automatic in case anyone cares.

I also received the pilot bearing for the flywheel and clutch along with the hiem joint conversion kit for the pushrod on the Ford clutch master cylinder.

Waiting on the clutch kit, the master & slave kit as a pre-bled package, waiting on the ARP clutch pressure plate cover bolts and on new bellhousing bolts for the transmission to Cummins adapter.

I am also waiting on the rear transmission mount so I can fabricate a spot on the crossmember/skid plate for it to fit.

Removed the front passenger fender now too so I can test fit everything into the Jeep where it needs to sit properly.

On the front axle, I have taken the flat-top knuckles, arms and steering linkage off of another D44 axle I had and getting ready to swap out the CJ knuckles to the small bearing knuckles and outers. This will also transfer the 300M CTM U joints over to the Jeep and significantly strengthen the outer knuckles, stubs and steering from the CJ 1/4 ton stuff to 1/2-3/4 ton Chevy and 1-ton rod ends instead of heims. I really don't like using heim joints in steering on street vehicles for safety. Even with safety washers to prevent a separation in a failure, they aren't 50 state legal and some states don't allow them at all on anything but race vehicles not street tagged.


More forward motion all at the same time I am working on my 40ft sailboat. two projects at two different locations...... Fun!

Again, yes I know this is a CJ-7 I am installing the Cummins engine in but it is really relevant to all you YJ people because these rigs are very similar in design and layout. Again this is the reason I posted it here in case any of you YJ Wrangler owners were thinking about a diesel swap too.

The differences would be minor and I know many of the parts needed to do a YJ or TJ Wrangler are the same if not very close.

More parts came in this week:

Clutch parts including hydraulics and a replacement vacuum pump assembly for the bad one with bent pulley.

Dog days of summer are here.

This past weekend:
Getting the engine crane back into working shape and preparing to get the driveline all mocked up so I can position it in the vehicle. The engine crane and stand have been sitting out on the side of the house so some maintenance was in order to make them functional and safe again. When I moved from a 1300 sq. ft. shop to a 500 sq. ft. shop, I lost a lot of storage where these sorts of things were kept. Now getting things back in order so I can use them on this project.

In the last week of June the Jeep finally went back in the garage for the first time since I moved almost 2 1/2 years ago. I am able to do a lot more on it whereas when it was parked in the steep driveway tools and parts were constantly rolling down into the street below if they got away while doing work. Another advantage.... level ground. I do miss the old 70 foot long double driveway with gates at the end the old house had. Trade-offs!

Received the clutch and pressure plate a week ago and now I am hunting down cover bolts and bellhousing bolts.

I will post some pictures SOON when I start bolting everything up together and when I install the adaptor on the transfer case because this may be of interest to other CJ/YJ/TJ owners contemplating doing a transmission swap where an adapter is needed.


I am getting much closer now that almost all the parts have been gathered up to mocking up and final installation.

Been working on my 40' sailboat at the same time installing all new NMEA electronics and LED lighting. Also installing dinghy davits and a solar array so that I can go cruise and live off the grid for a while. Both boating and Jeeping are expensive time consuming hobbies but I think they are well worth it. The kids love going on adventures in both and always seem to have the time of their lives so it makes it all worth it in the end to me.

I know I keep promising pictures and they will be coming soon folks.

Thanks to all who are following my build.

If you have any questions about a Cummins diesel conversion in your YJ, feel free to ask me because I know CJ's, YJ's, TJ's and JK's very well having owned 12 Jeeps over the decades. I have also researched Mercedes and VW diesels in Jeeps and have quite a bit on those too.

We have all the parts to start assembling the entire drivetrain and get it mocked in the frame.

This will start happening in the next week or two, fingers crossed nothing disrupting with the kids and school.